It’s been an entire year since the State Superintendent brought to the IL State Board of Education a proposal for revamping the state standardized test system by increasing 3-8th grade math and reading testing to three times per year rather than just once and adding optional tests for K-2 as well.

The K-2 part of the proposal will be blocked if Governor Pritzker signs SB 3986, the Too Young To Test bill, which was sent to his desk on April 29th. But the proposal for 3-8th grade is still on the table.

In a very positive development, however, the Center for Assessment, the research group that ISBE engaged to collect stakeholder feedback and make recommendations on the proposal, released its findings at the April board meeting. The top takeaway from the Center’s report was that there was no support for including interim/through-year tests into the state’s accountability system, i.e. the 3x/year plan. The Center also encouraged the state to improve the current test to the extent possible and to proceed thoughtfully and deliberately in developing an overhaul plan.

IL-FPS held a press conference on April 29th with the IL Federation of Teachers and State Senator Cristina Pacione-Zayas to discuss the report on and, in light of the Center’s recs, to push ISBE to go back to the drawing board. You can watch it here.

Chicago Tribune Illinois educators, union leaders demand end to standardized student testing: 'This is a racist relic of the past'

What’s next? The State Board could still vote on their original plan, possibly updated in response to the Center’s conclusions, at their June meeting. They could also not make any changes to 3-8th grade tests at all. Recently outgoing Board Chair Darren Reisberg told Chalkbeat floated that as a possibility: “By the time we get feedback, I think the four years of our respective terms are going to be up.”

We think it would be a shame if ISBE didn’t act on the current momentum to improve the state testing system. The federal government requires annual math and reading tests for 3-8th grade, but some of the worst features of the current IAR tests could be changed in the near term. It could be shortened (the SAT is more than 2 hours shorter than the 4-8th grade IAR). Results could be returned during the school year that the test is taken in rather than months later. Score reports could provide more detailed info to teachers and families.

And with respect to more major changes, the state could support districts in pursuing assessment practices that can inform day-to-day classroom instruction—rather than signing more contracts with commercial test vendors for the type of interim testing that we know doesn’t even result in increased student test scores.

It’s important that the State Board continues to hear from families about the impact of the current system on their children and their schools. You can speak during board meetings and committee meetings via public participation by phone (or in-person if you are near Springfield.) Upcoming dates are this coming Wednesday May 18th, June 2nd and June 15th. Email us for more info: [email protected]

A federal bill to create a national database of personal information on any student enrolled in a post-secondary institution is moving its way through Congress. The negative implications for student privacy of this bill are huge, and we’ve been working with state and national orgs around the country to oppose it.

There’s been a ban on a national higher-ed student database since 2008. A push was made to lift that ban and also create a K-12 student database in 2017, but it was defeated by privacy advocates. This new legislation passed in the US House in February as part of the larger America COMPETES Act, but it wasn’t in the Senate version that passed last summer. Now there is a conference committee to decide what will be in the final bill to be voted on again by both chambers.

You can read more about this issue and why IL-FPS and other privacy advocates are deeply concerned about the College Transparency Act's implications for student privacy here. Basically, this bill would allow extensive and unconstrained collection of sensitive data for purposes that can already be fulfilled by existing data sources.

There’s been some indication that one of the Senate sponsors of the College Transparency Act isn’t supporting its inclusion in the final bill, Sen Bill Cassidy (R-LA), but calls to our Senators Durbin and Duckworth and to your congressperson asking them to oppose inclusion of the College Transparency Act in a final version of the America COMPETES Act are still very needed! You can also use this page to email both senators and your own US rep if you haven't yet done so.

There are several US representatives from Illinois on the conference committee---Jan Schakowsky, Danny Davis, Bill Foster and Adam Kinzinger, and our senior US Senator Dick Durbin, is the majority whip for the Democrats. All of these legislators can be especially influential in the outcome of the conference committee and need to hear from constituents that the College Transparency Act isn't

What happened with EITC and the child tax credit?

Institute on Taxation and Economic Policy: State Rundown 4/13: Recent State Budgets Prove Not All Tax Cuts are the Same

The EITC will increase to 20% of the federal EITC level and cover an expanded set of tax filers (young, old and those with an ITIN rather than a social security number.) Unfortunately, the creation of a permanent child tax credit wasn’t part of the budget for this year, but a one year income tax rebate of $100 per dependent was included. The coalition plans to keep pushing for a parent/caregiver tax credit in future years.

On a related note, the coalition has also been supporting a historic guaranteed income pilot in Chicago, which will provide $500 monthly cash payments to 5,000 low-income Chicago residents over 12 months. The application deadline for the pilot is this Friday 5/13 at midnight. Details on how to apply here.

A detailed list of what else made it into the budget bills is here. The annual required increase to state funding of the evidence-based funding formula for K-12 schools of $350 million was (thankfully!) included.

There have been a number of articles and reports recently about educator attrition and the growing teacher shortage. The Spring 2022 Education Issues Forum, organized by IL-FPS board member Dr. Diane Horwitz, will look at some of the causes of this phenomenon and offer strategies for changes, for whole school supports, staff wellness initiatives, and for policy recommendation to support our teachers, counselors and administrators.

Some background reading on this topic:

The fight to defend public schools as a public good in a healthy democracy is more urgent than ever.

And that makes iL-FPS' advocacy and lobbying—for humane, child-centered education policies and laws and a well-resourced, fairly funded public school system that carries those out—more vital than ever!

As a scrappy grassroots org with a shoestring budget we couldn't keep on keepin' on in this work without our monthly donors. Thank you to all of you for your ongoing support! And if you aren't yet a monthly donor, you can sign up here. We doubled our number of monthly donors in 2021, and we're hoping to do that again in 2022! 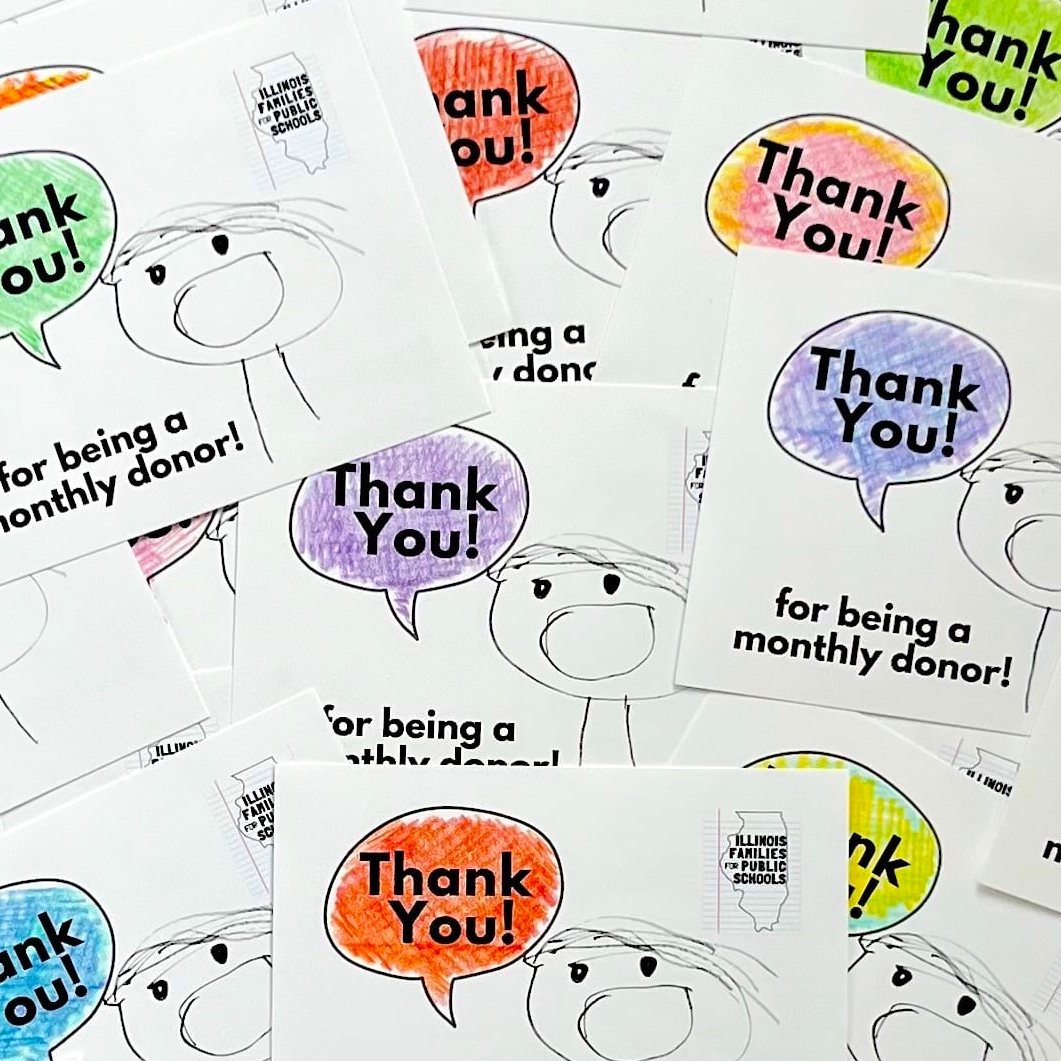