Action Alert: Ask Sen. Durbin to oppose the College Transparency Act and say NO to a federal student surveillance system

On February 4th, the US House approved a version of the America COMPETES Act that includes the College Transparency Act (CTA), a bill that would allow the US Department of Education to create a federal database to track every student who enrolls in a US institution of post-secondary ed from enrollment to end of life.

The Senate version of America Competes didn’t include the CTA, and now the two chambers are working out via conference committee whether it will be in the final version. As the second-highest ranking Democrat in the Senate, Senate Majority Whip Dick Durbin can influence what will happen with this bill. 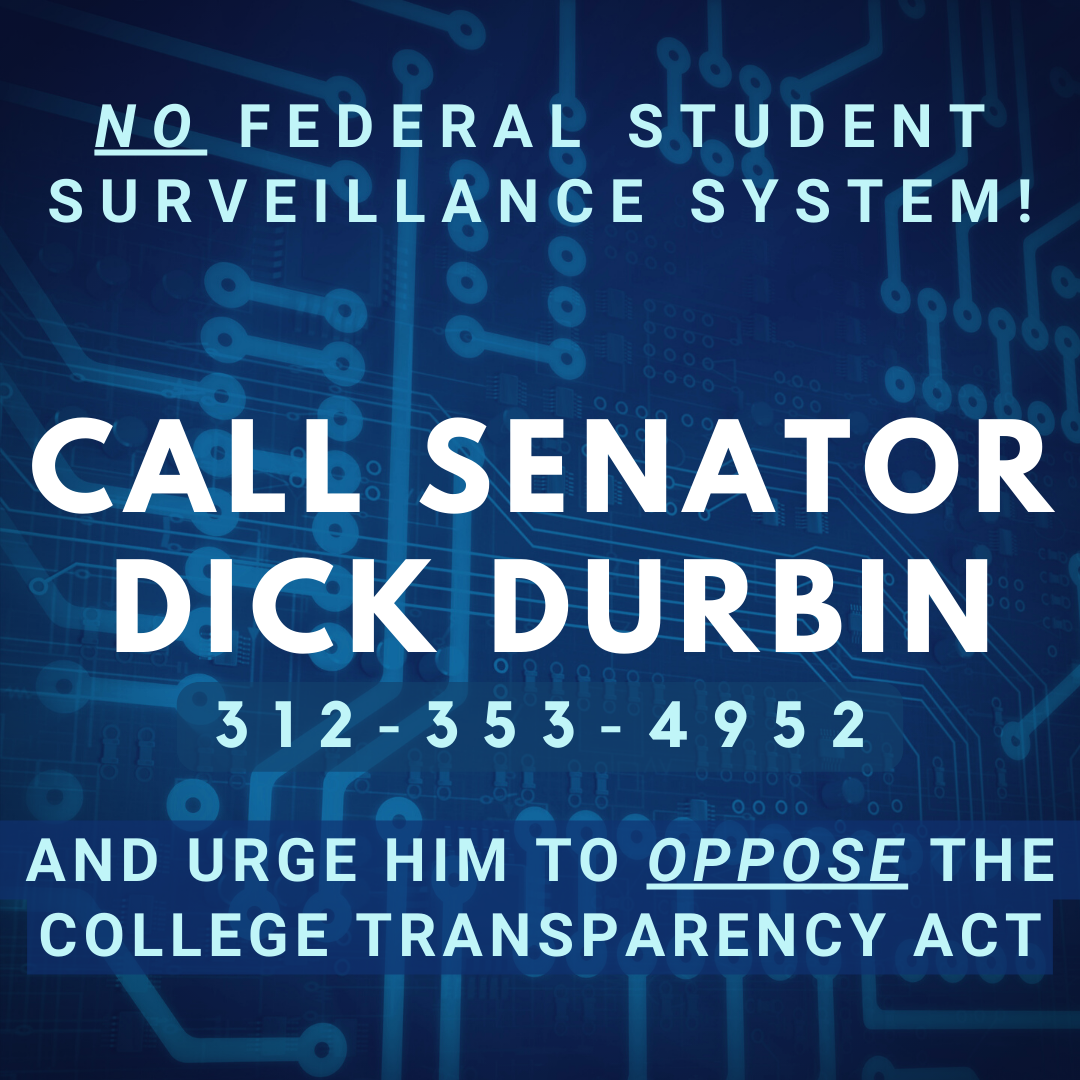 Please give Senator Durbin a call today and ask him to oppose the creation of a federal student surveillance system and the inclusion of the College Transparency Act in the final version of the America Competes Act.

What should you know about the College Transparency Act?

The CTA would create a federal post-secondary student database, which would include at a minimum a student’s personally-identifiable information along with enrollment status, attendance, age, race/ethnicity, gender, disability status, incarceration status, whether the student has loans, and more. And the bill language permits almost any other information to be added in the future at the discretion of the Dept. of Education.

Students would not have the option of opting out or having their data deleted. The US Dept of Ed could connect this database to data from the Department of Defense, the Veterans Administration, the Census Bureau, the Social Security Administration and other federal agencies.

The larger the database, the more value it has to hackers; and the more data exposed when it is breached. And data collected for one purpose, even a seemingly innocent one, can later be used for something very different and harmful. (Examples like this and this.) And the groups behind this post-secondary database have long wanted a national PreK-12 data system as well; the creation of the college-level database could break down barriers to the even more disturbing idea of a PreK-12 one

The intent behind the database is to evaluate colleges and universities for whether students are getting their money’s worth from their tuition: what are their chances of graduation, what are their career and earnings prospects afterwards, how much debt will they accrue and how easily can they pay it off?

What could Congress be passing instead?

We don’t disagree that this is an important issue, and it’s appropriate for the feds to monitor and regulate institutions of higher ed to make sure that students aren’t being scammed. But there already exist plenty of other data sources, some already held by the federal government, on student outcomes. And the solution to college and universities exploiting college students isn’t an all-encompassing federal student data system that can lead to far bigger problems.

If Congress is concerned about the long-term financial prospects of students pursuing post-secondary ed, they should be passing legislation to cancel student debt, make public college free, and establish the social safety nets that the US lacks, like universal healthcare.

Furthermore, the US still has no federal privacy law protecting our personal information and our child and student privacy laws are woefully outdated and weak. Congress should be working on a US-version of Europe’s GDPR, not engaging in a rapacious data grab from young people just embarking on adulthood.

What can you do?

In 2008 Congress passed a ban on the creation of just such a database, which was upheld again in 2017 because of massive opposition on privacy grounds. The College Transparency Act was placed into the America Competes Act very quietly earlier this year, which is how it passed in the House with zero scrutiny.

You can also use this link to send a letter via Action Network to all your federal legislators. The House will vote again on this bill and some IL Congressional Reps are members of the conference committee including Jan Schakowsky (9th), Mike Bost (12th) Darin LaHood (18th), Bill Foster (11th), Danny Davis (7th) and Adam Kinzinger (16th).