Updates on standardized testing bills in hearing in the House this week, HB 5285 and HB 5149; expanding the Earned Income Credit and creating a Child Tax Credit to make IL's tax structure less regressive; what's happening with the mask mandate lawsuit and its impact on schools.

Lots of action on standardized testing bills this week!

Thank you to everyone who has been putting in witness slips and making calls on the Too Young To Test bill and to our chief sponsor, Sen. Cristina Pacione-Zayas. The Senate version of Too Young To Test, SB 3986, passed last Tuesday in the Senate Education Committee. It could have a Senate floor vote very soon, so this is the time to call your State Senator (again!), ask them to sponsor and vote yes. (List of current cosponsors is here.)

This Wednesday 2/16 at 2pm the House version of that same language, HB 5285, introduced by Rep Lindsey LaPointe, has a House Education Committee hearing. So it’s time to put in another PROPONENT witness slip and make a call to your state rep. 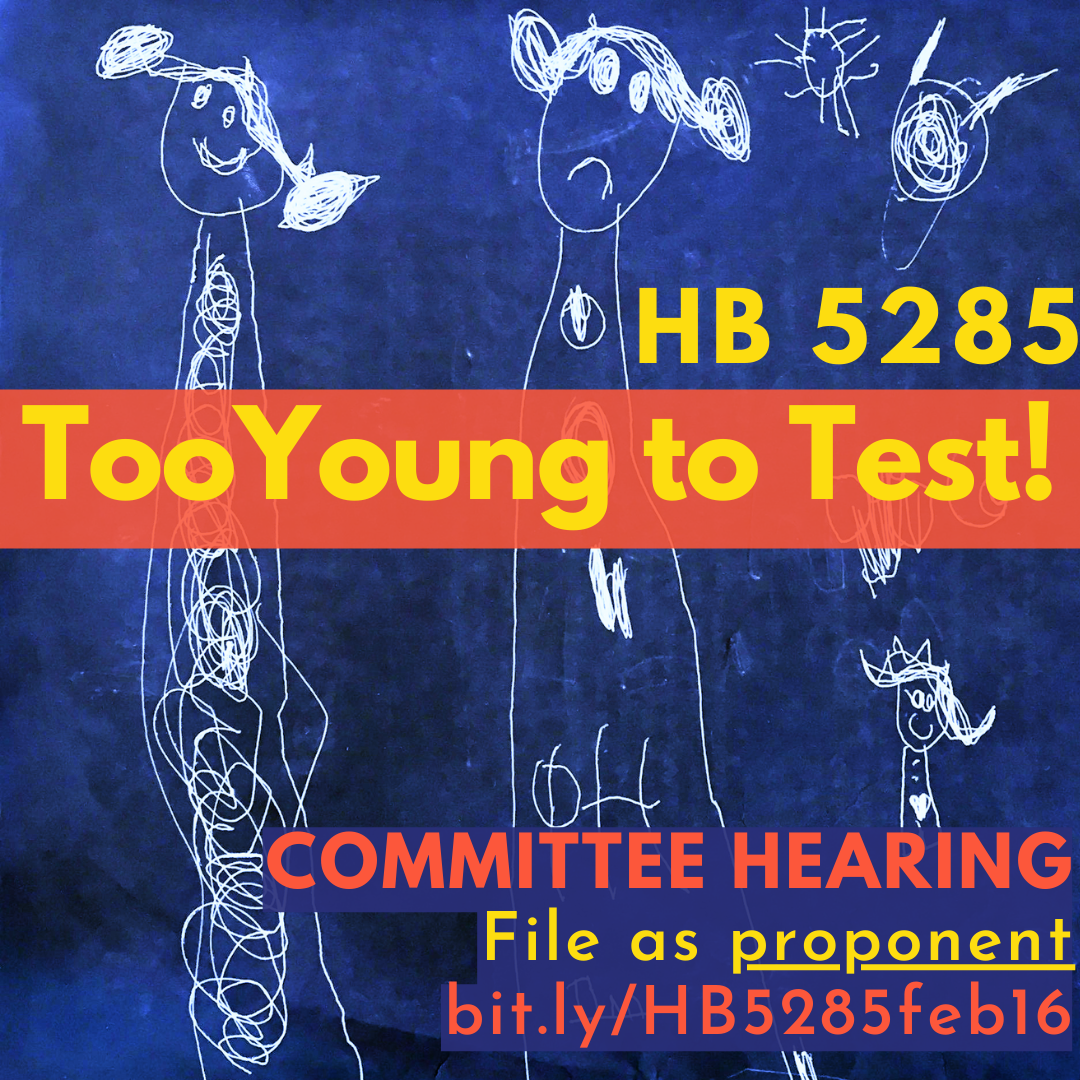 There’s also another important and related bill being heard in House Executive Committee this week, HB 5149, with Rep Jackie Haas as the chief sponsor.

HB 5149 would prevent the IL State Board of Education from administering standardized math and reading tests in 3rd to 8th grade more than once a year. As we’ve shared before, ISBE is proposing to do just that, a proposal that we think is troubling both because it would expand state tests into K-2 but also because it would increase 3-8th grade tests to three times per year. The federal government does require either of these changes. High-stakes state testing causes enough disruption once a year; whatever ails accountability testing in Illinois, making it more frequent is not going to be the solution.

We agree with the letter sent by 37 legislators to ISBE in December; we too have “serious concerns about the process and substance of [ISBE’s] proposed changes to the state assessment and accountability system.” The General Assembly can make it clear that more frequent testing and testing for younger kids isn’t on the table now or in the future by passing both these bills!

State Rep: I’m a constituent who is concerned about the State Board of Ed’s push to increase state testing. Young children do not need more standardized testing, especially now of all times. And third graders and above don’t either! I’d like the Representative to sponsor both HB 5285 the Too Young to Test bill and HB 5149, a bill to restrict state testing to once a year.

State Senator: I’m a constituent who is concerned about the State Board of Ed’s push to increase state testing. Young children do not need more standardized testing, especially now of all times. I’m asking the Senator to sponsor and vote yes on the floor on SB 3986, the Too Young to Test bill.

What can be done about IL’s regressive tax code?

In November 2020 the long awaited vote on an amendment to IL’s constitution that would have permitted the state to have a graduated rather than a flat income tax failed. Illinois has long had one of the most regressive state tax systems in the country. And without the ability to raise taxes on the people who can most afford to pay them, we instead have overall insufficient revenue to pay for the public goods we need to create a well-functioning society that works for us all.

Another ballot referendum on the graduated income tax is off the table for the foreseeable future. In the meantime, advocacy orgs from around the state, including IL Families for Public Schools, are partnering with the Cost of Living Refund Coalition to ameliorate the effects of IL’s regressive tax policies with tax credits for lower-income brackets to offset the impact of a flat tax. A bill to expand the Earned Income Credit this year and create a Child Tax Credit next year is going to be heard tomorrow (Tuesday 2/15) at 5pm in the House Revenue & Finance Committee. Read more about the legislation the coalition is advocating for here.

Despite expectations that a stay might be issued last week by the appeals court where the lawsuit will be heard next, that has not happened. The State has appealed the circuit court ruling, and the appellate court should rule on this at the latest by this Thursday. (Read this post for more background on the Feb 4 ruling.)

In the meantime, the chaos of the last week has continued. Some school districts closed or had elearning days immediately after the ruling was issued. And some have closed buildings more recently due to protests and threats of violence (e.g. Fremont D79, and Hampshire High School in CUSD 300). School board members and administrators have been threatened. School board meetings have been overrun by unruly protesters. Some meetings have been moved online as a result. The Board President in Oswego D308 resigned over concerns about herself and her family.

What can you do in the face of all this disruption? Make sure your school board members are hearing from you about the need for covid mitigation measures to keep schools open and safe for all children. Your state legislators need to hear from you too. Not everything is being covered in the media; let them know that legislation is needed to address what schools must do during a public health emergency. Here are sample letters you can use to write to both board members and legislators.

The resources we shared at last month's event for organizing with others in your district can be found on our page Countering Disinformation in School Communities. Also this Saturday 2/19 at noon is another in the 3rd Saturday series of virtual events held by NWSOFA and Indivisible Illinois Social Justice Alliance on "Combating Disinformation at Your Local School Board Meetings." (Register at the link.)