Laws and policies at the federal, state and local level have attached high-stakes consequences to standardized test scores for students, teachers and schools. The resulting overuse and misuse of standardized testing harms children and schools. It distorts both teaching and learning in the classrooms. High-stakes testing negatively affects children's emotional and mental health. It's narrowed curriculum and educational experiences. And it is used as a lever to under-resource, punish, and close schools in the very communities most in need of educational resources. Families who want to take direct action to oppose the misuse of standardize testing can refuse to allow their children to participate in these tests. 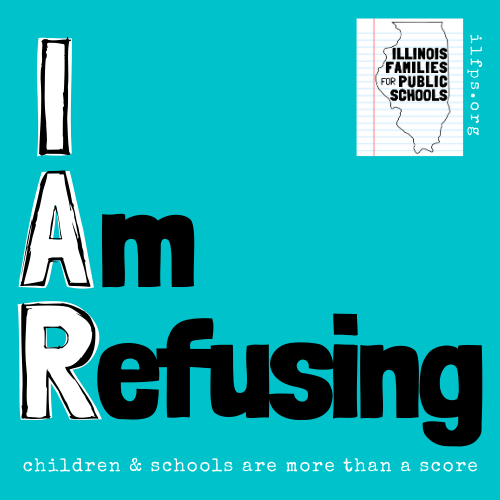 Although the federal government says public schools must administer certain tests, it does not say that every child, against their and their families wishes, must participate in the testing. Although the Illinois State Board of Education does not recognize parents' right to opt children out of testing, they have said districts can develop a policy for those students who refuse testing.

We recommend notifying the school ahead of time that your child will be refusing state testing and requesting info on how the school is planning for students who refuse to test. We have sample language and an FAQ on refusing state tests here. If you have questions, you can call or text 413-3OPTOUT or email [email protected].

Fair Test, a national advocacy group, has extensive background and resources on how and why to opt out here and on the problems with high-stakes standardized testing that motivate families to refuse testing here.

If you are concerned about the impact of standardized testing on children and schools, make sure you are on our mailing list to receive updates about testing-related policy and legislation.

(Print the I Am Refusing image as Avery 6874 stickers)

Since the passage of the No Child Left Behind Act (NCLB) almost two decades ago and now under the Every Student Succeeds Act (ESSA), the federal government has required all public schools in the United States to administer annual testing in reading and math from 3rd to 8th grade and once in high school and science testing three times across 3rd through 12th grades. English-language learners' proficiency is assessed every year (on top of these other tests in academic subjects, which are administered regardless of a student's fluency in English.)

States can choose which tests to administer to fulfill these requirements. The state pays for federally-mandated testing with state and federal funds. The results of these tests are used as factors in the state's school tier rating system.

For 3rd-8th grade math and reading, Illinois previously used ISAT, then PARCC, and now they use a test that is a slightly shorter version of PARCC, the Illinois Assessment of Readiness or IAR.

After many years of administering ACT, and then briefly PARCC, Illinois now requires high schools to administer the SAT to all 11th graders to comply with the federal requirement for annual testing in high school. Illinois is now also requiring districts to administer PSAT in 9th and 10th grade. (Read about our concerns with how the vendor for the SAT and PSAT is selling student data here.)

For science, Illinois uses the Illinois Science Assessment; this year it will be administered in grades 5th, 8th and 11th.

Students with the most severe cognitive disabilities take neither IAR nor SAT, but instead take an alternative assessment the DLM.

Finally, English-language learners from K-12 are given the ACCESS test to assess their proficiency and need for services as emerging bilingual students.

The state uses these scores as factors to assign a rating of your school's performance (Tier 1-4). Refusal/opt out affects your school’s state rating in two ways. Schools that do not have at least 95% participation will not be able to receive the top rating (“Exemplary” or Tier 1) from the state, and after three years in a row under <95%, schools may be assigned a Tier 3 rating (“Underperforming”).

Also, students who refuse are counted as not having met expectations (even though there's no obligation under federal law to do so). Crucially though, since changes in the federal law passed in 2015, a low rating is not tied to punitive policies but to additional funding for things like improving curriculum or climate. (See p. 84 here.) And note that after many years of mass opt out across the country, the federal government has still never penalized any state or district for low participation rates.

The first step in pushing back against the misuse and overuse of standardized testing is knowing what testing is taking place. State law requires each public school to report to the IL State Board of Ed and to parents:

If your school hasn't sent this information home or posted it online by the 30th day of school, ask your principal to provide it. Some testing is required by federal or state law, but much is at the discretion of districts and schools. Here's the most recent schedule for 2022 state-mandated testss.

High-stakes attached to testing for the students themselves in elementary school is rare in Illinois outside of Chicago Public Schools. In public high schools, students must take the SAT in order to receive a diploma. Check with your school and district administrators and ask for documentation in writing of how test scores will be used; it is their legal obligation to provide you with this information.

You can also check whether your school has provided the IL State Board of Ed with this information via the ISBE website. If the info sent to ISBE seems inaccurate or is missing, let your elected school board or local school council know that your school is out of compliance with state law.

Check our legislation page for current testing-related legislation that we are supporting or opposing.

Unfortunately, there are currently no bills to clarify parental rights around opting children out of state-mandated standardized testing. In the past, we have supported bills (like this one in 2018). Under that legislation, parents would be able to notify schools in writing that their child was opting out of any state-mandated standardized testing. The child would be provided with an alternative educational activity during test.  There would be no negative consequences for students, families, teachers, administrators, schools or districts. A law like this especially needed to protect children who are not capable of refusing testing themselves but who are directly harmed by participating in testing.