A short (and disturbing!) tour of voucher programs around the Midwest

The push to dismantle public education via voucher schemes that start small and then metastasize to drain public coffers isn’t just a battle happening in Illinois. It’s nationwide, and it’s accelerating. Scroll down for a post-lame-duck session update on own Illinois’ Invest in Kids voucher program, but first let’s take a look at what’s happening in our neighboring states. 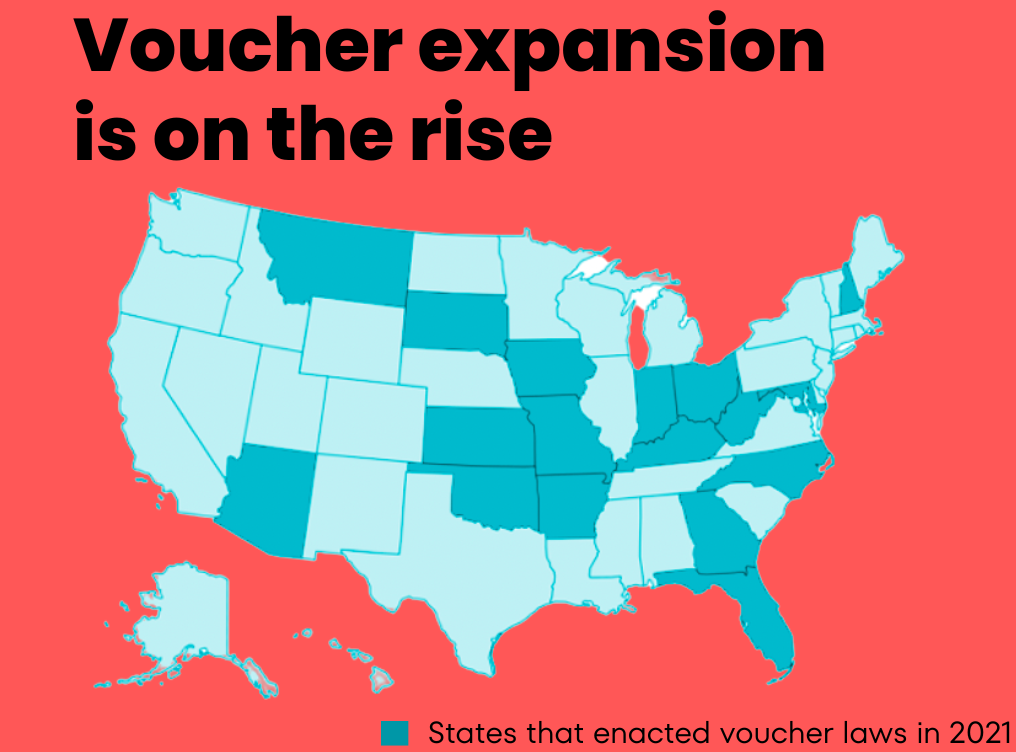 Wisconsin and Indiana have long been cautionary privatization tales. Wisconsin’s voucher program ballooned from $700K in 1991 to $444M this school year. Indiana’s program started in 2011, and initially budget figures claimed a savings of $4M from the program, but by last year the annual cost was up to $241M. Academic achievement results from Indiana’s voucher program have been dismal. Wisconsin’s program hasn’t had a long-term study for more than a decade, but the most recent study (2010) showed no achievement benefits for voucher students. (See discussion here.)

In Iowa the Republican governor’s plan for creating a massive Education Savings Account program may finally have the votes to succeed after she helped bump off the remaining opponents to it in her own party, rural Republicans, during last year’s primary election. But the battle is a noisy one in their state capitol nonetheless with robust opposition from Democrats in both chambers, and last year’s fight appeared to push public opinion there further against vouchers.

In Missouri lawmakers are already talking about expanding their brand new voucher program, also set up like IL’s as a tax-credit scholarship mechanism, a design choice that deliberately tries to circumvent the separation of church and state with voucher fund middlemen as the conduit for distributing tax dollars to private schools.

A rare bright spot is Kentucky, where their tax credit scholarship program was ruled unconstitutional by the Kentucky Supreme Court last month.

The unanimous ruling makes it clear that the program raises public funds which are diverted to private schools: “[T]he income tax credit raises money for nonpublic education and its characterization as a tax credit rather than an appropriation is immaterial.“ And, since Kentucky’s constitution prohibits spending funds raised for education for anything other than public schools unless it is approved by voters, the program was ruled unconstitutional.

Michigan is another positive piece of news. It's the home state of Betsy DeVos, and she and her family had been dumping millions into a push for a massive tax credit scholarship program there. But with the control of the Michigan legislature switching from Republican to Democratic in November and a likely defeat at the polls due to the unpopularity of voucher programs, DeVos-funded groups withdrew their attempt to get a ballot initiative approved that would have created the voucher program without the need for approval from the Governor.

What to make of all this from our near neighbors? One, it is imperative that Illinois’ program ends as intended! Even small-ish programs can grow huge quickly. The fight here currently is to make Invest in Kids permanent. If pro-voucher groups succeed, they will then simply return to Springfield with their busloads of voucher students to push to make the program bigger. Bills trying to do both have previously been introduced in Springfield with support from both sides of the aisle (e.g. see expansion bills here and here and bill to make permanent here.)

Two, those of us who are pro-public schools may not have billionaires bankrolling us, but we do have the facts and popular opinion our side. Once people know about this program, they are very alarmed. As the Kentucky court case made clear, this program is taking tax revenue that should be appropriated for the public good and redirecting it for private purposes. Moreover, it is funding mostly religious institutions, and many of these schools, possibly most, engage in discrimination. (Only 15% of Invest in Kids voucher schools report serving any special education students!)

Meanwhile, our public schools, which must serve all kids, are still short by billions of dollars of state funding. Voucher programs aren’t good public policy, and this is a fight worth having.

What’s next for the Invest in Kids Act?

Thankfully, for the Invest in Kids voucher program it was a case of ‘no news is good news.’ Nothing moved that would extend or expand it. This was a welcome development: it means that there is now the opportunity to make sure our state legislators get input from their constituents who believe public dollars are for public schools.

As we’ve been speaking with legislators in recent weeks, we continue to hear that the conversation about vouchers in the General Assembly has been a one-sided one, i.e. it's just the voices of pro-privatization folks and the voucher supporters they are bussing to Springfield on a regular basis.

The truth is that Invest in Kids only benefits the 9,000 Illinois students receiving vouchers, i.e. .4% of the school-aged child population in our state, and the wealthy taxpayers redirecting their tax payments to private schools. Meanwhile it’s draining dollars from the General Revenue Fund that could be used for the benefit of 1,800,000 public school students, the majority of which are still attending schools inadequately funded by the state.

But, besides hearing that lawmakers have barely heard from voucher opponents, we’ve also talked to many reps and senators for whom the idea of siphoning away scarce public dollars to religious schools simply doesn’t sit right.

The numbers and the facts are on the side of the public good. We can end this program, but we need to get mobilized.

How you can help: 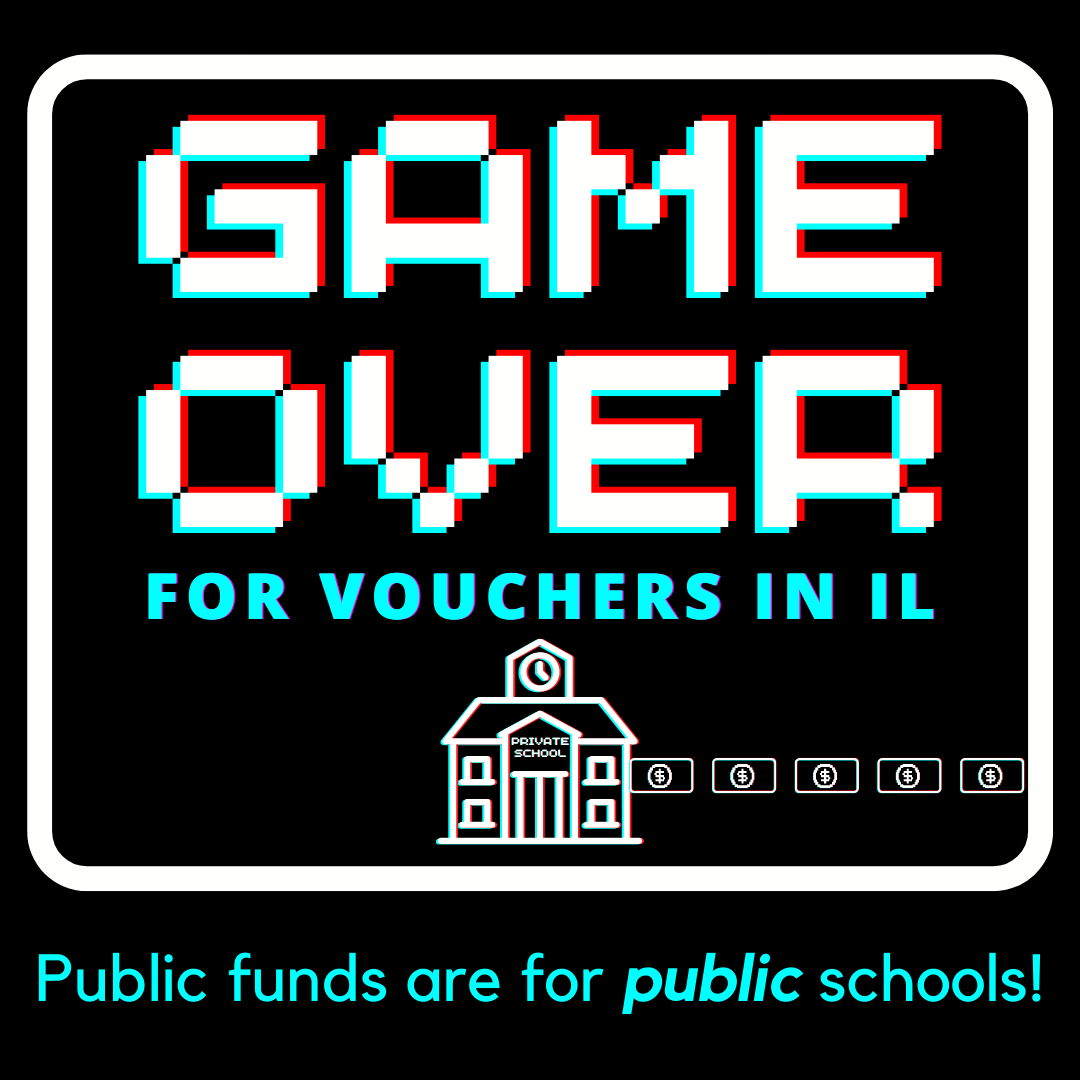 We have a growing list of resources on the Game over for IL Vouchers campaign page to read (and share!) with info on the Invest in Kids program and vouchers in general:

Other news on school funding and tax credits (the right kind!)

The debate on what will be in the state budget for fiscal year 2024 has already begun. The IL State Board of Education will be asking for only  $350M in additional state funding for K-12 next year. $350M is the annual increase stipulated as a minimum when the new state funding formula was passed in 2017, but it’s far less than the annual increase needed to get to full funding by 2027, a goal also set in 2017.

To reach that goal, the state should be adding almost $1.5B each year through FY2027. A perennial question in Illinois is where could that money come from. Ultimately, if we need additional revenue (and we surely do!), it ought to come from those who have the most ability to pay. Unfortunately, the attempt to amend the constitution in 2020 to allow the state to levy a graduated income tax fell short.

A new effort to get that amendment passed is not yet a reality though it got raised in the media this week.

In the meantime, we’ve been part of a coalition working on ways to make our regressive and inequitable Illinois tax system more fair, including pushing successfully for an expansion of the earned income tax credit (EITC) last year. The coalition is still working on the creation of a state child/caregiver tax credit and also advocating for ways to simplify filing for low- and middle-income tax payers to ensure they actually receive the credits they are owed.

If you want to learn more about the latter program, join the online briefing from New America  tomorrow Fri Jan 20 at 1:30-3pm hosted by coalition partners including IL-FPS: