February’s News You Can Use: the Right to Play; Google sued over student privacy; Pritzker's K-12 school budget

1. Time to call your state senator about the Right to Play Every Day bill!

IL Families for Public Schools is working to bring play back to our schools with SB3717. This bill has been filed in the Senate, and it’s awaiting assignment to a committee. (Details on a bill’s path to becoming a law in the ILGA here.) 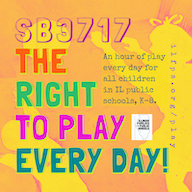 What does SB3717 say? Public schools need to provide at least 60 minutes in total of unstructured, screen-free play time for all K-8 students. Play time would count towards the minimum length of the school day (so school days wouldn’t need to be lengthened), and it couldn’t be withheld as punishment. You can read (and share!) a post on Defending the Early Years about the why IL schools and kids need this bill here. And we also have a 1-page fact sheet to download.

What can you do? First, call your state senator and ask them to sign on as a co-sponsor of SB3717! (Look up your IL State Senator here.)

“Hi, I’m a constituent, and I’m calling to ask Sen. X to sponsor SB3717, a bill to bring play back to public schools. It would give every child K-8th grades 60 minutes of free play a day. This bill is important to me because {I’m a parent/teacher/grandparent; children aren’t getting enough free play; testing has pushed out developmentally-appropriate activities; play is fundamental to learning.}

Next: tell your friends, family, colleagues and neighbors about this bill! Share the link ifps.org/play on social media, and let people know why the Right to Play matters for your child and all IL children and how they can help.

Last week the Attorney General of New Mexico filed a lawsuit against Google over its G Suite for Education products, saying: “The consequences of Google’s tracking cannot be overstated: Children are being monitored by one of the largest data mining companies in the world, at school, at home, on mobile devices, without their knowledge and without the permission of their parents.[...] While purporting to offer only educational services, Google instead has stripped children and parents of autonomy and control of their most sensitive personal information, forcing children to acquiesce to constant monitoring, in perpetuity, in exchange for their education.”

Read more about the lawsuit here:

We highly recommend reading the actual filing document as well for its description of what Google is collecting, including children’s physical location and complete web history, and how it uses that data. Although this suit was filed in New Mexico, the exact same collection is happening to millions of children in Illinois and across the country as well.

What can you do?  Although this lawsuit has only been filed in New Mexico so far, frequently attorneys general from multiple states join together on national issues. Call the Illinois Attorney General's office and urge AG Kwame Raoul to join this suit: (312) 814-3000 or (217) 782-1090

Sample script: “I’m an Illinois resident [with a child in public school], and I am deeply dismayed about what Google is collecting on public school students via their so-called 'free' educational software. I urge AG Raoul to join the suit against Google brought by the AG in New Mexico on behalf of IL school students who are being exploited in the same way via Google’s deceptive business practices.”

If your child has a G Suite for Education account, ask for answers from school officials about what’s being collected via that account and who has access to it. For example, we have heard from parents about students being reprimanded at school for internet usage off school grounds, off school devices and outside of school hours.

As of July 2021, under the updated student data privacy law we helped pass last year, schools will have to post information like this on their websites, but you can still request it now. The Parent Coalition for Student Privacy has a comprehensive privacy toolkit for parents. We recommend Appendix D for what to ask your child’s school.

Last week Governor Pritzker presented his budget for fiscal year 2021 to the General Assembly. His proposal is contingent on the passage of an amendment to the IL Constitution on the ballot in November. That amendment will allow the state to levy a graduated income tax (aka ‘Fair Tax’), rather than the flat rate structure we currently have, which would bring in $1.4 billion more per year.

If the constitutional amendment doesn’t pass on the November ballot, Pritzker proposed a barebones austerity budget with only a $200 million increase for K-12 school funding. If it does pass, the state will put in an additional $150 million.

The truth is neither of these amounts are acceptable. The GA committed to contributing an additional $350 million every year when it passed the new funding formula in 2017. That commitment didn’t rest on any contingency of a graduated income tax; it was made under a Republican governor who had no plans for a graduated income tax. It was meant to make up for decades of chronic underfunding to that point.

And $350 million was intended as the bare minimum for an increase in K-12 funding each year. Adding it every year will still only bring the state into adequately funding its public schools three decades from now; full funding within ten years would require double that. Our school system is still $7 billion short of what schools need to educate the children they serve.

“I’m a constituent and a public school {parent, teacher, student, supporter, alum}. The governor’s proposal of $200 million of additional state funding for state schools with another $150 million dependent on the passage of the constitutional amendment is not enough. I fully support the graduated income tax amendment, but $350 million is the minimum acceptable amount of additional funding with or without a graduated income tax; and it is far less than the amount that schools should get this year if the amendment passes. Our children deserve better right out of the gate. Appropriate the $510 million that the IL State Board of Ed requested.

This is an important message to share with your state senator and state rep too because they will vote on the budget later this spring.