We shared with you last week that book banning attempts are on the rise nationally, and right here in Downers Grove a meeting was held Monday where a small group of parents supported by outside agitators showed up to try and have award-winning LGBTQ books banned from the school library. Luckily, the community came out in force to speak out against this attempt at this bigoted attempt at censorship.

The meeting was covered not just in local but in national press:

WGN Radio Downers Grove School District 99 Superintendent Hank Thiele joins John Williams to explain why parents are clashing over a book that remains on the shelf in school libraries.

Recap: ILGA subject matter hearing on the future of state testing in IL

Chalkbeat did a nice recap of the state subject-matter hearing that happened Tuesday.

Many educators, students and administrators testified for the need for a more balanced system, and many concerns were raised around ISBE’s new proposal to use an interim test like NWEA-MAP as the new state test:

“Paul Zavitkovsky, assessment specialist at the Center for Urban Education Leadership at UIC, used MAP as a warning to state education leaders. Before 2013-2019, Chicago saw growth between third through eighth grade. When the district switched to MAP, that growth disappeared.”

For more info about the negative impact of attaching high-stakes to NWEA MAP in Chicago and elsewhere, you can download a recent presentation about Zavitkovsky’s research on MAP and CPS here: Map to Nowhere (Note that this file downloads as a Powerpoint, but each slide has a short embedded audio/video.)

Is your school is in compliance with the new IL recess law? Take our Recess Survey!

As you know, the Right to Play recess law was signed into law in August. This means that all K-5 students in IL public schools should be getting at least 30 minutes of unstructured play time daily this school year and that schools should not be taking away recess as a punitive measure. This is a great thing as ample research shows the numerous academic, health and social-emotional benefits of this low-cost intervention.

Unfortunately, we’ve heard from many people that schools have not yet implemented these changes, and even from some that daily recess isn’t happening at all. We want to get a temperature check of what’s happening with recess around the state. Please take a couple of minutes to fill out our brief recess survey! We will use this info to help advocate for better implementation.

In addition, we created a recess toolkit at the start of the school year to help you advocate if your district is not implementing the new law: 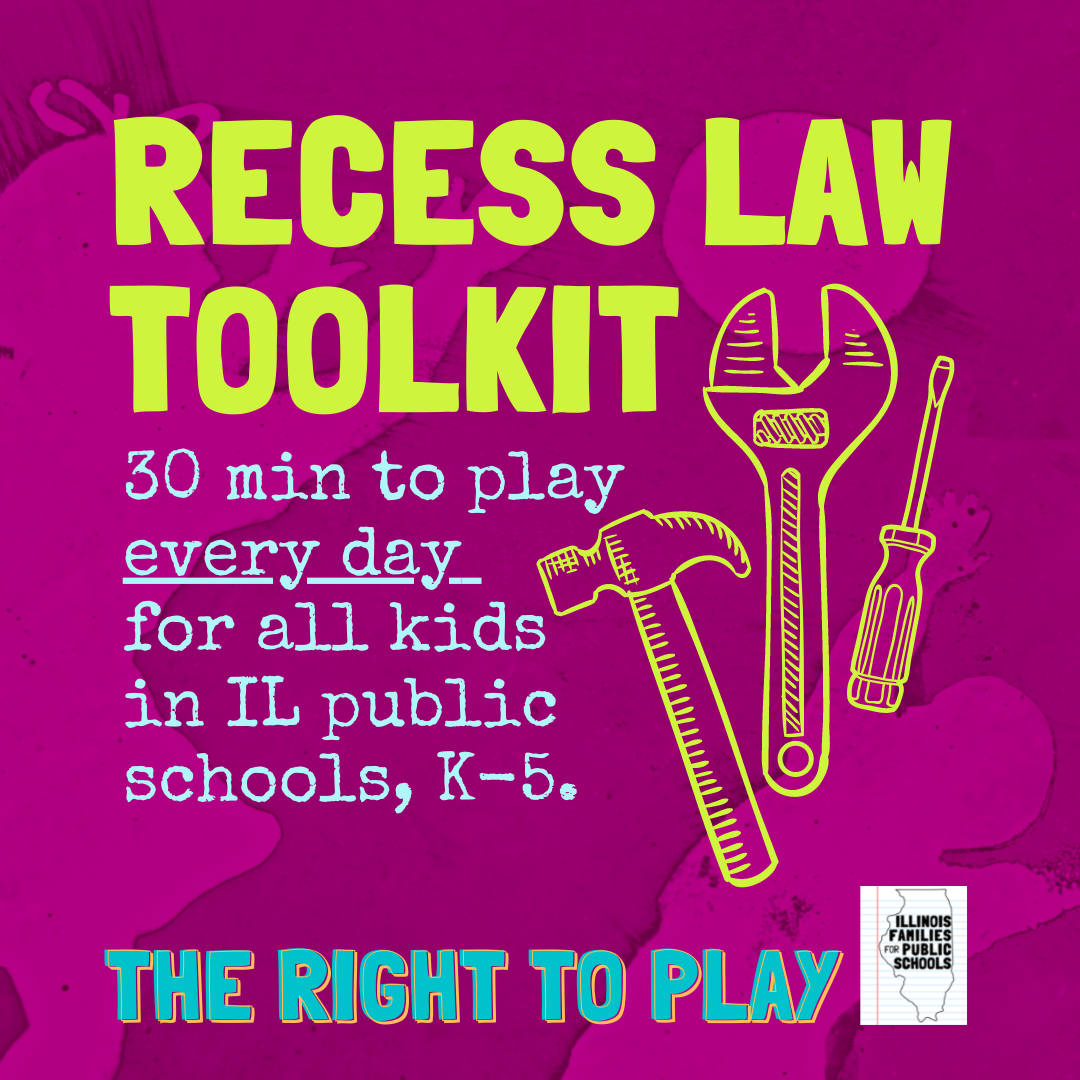 Thanks for your ongoing advocacy and for helping us get this bill passed! We will continue to work to ensure schools prioritize this important part of the school day for children.