Veto session recap and public forum on Invest in Kids

IL-FPS was in Springfield during this week’s veto session to talk to legislators about Illinois' voucher program. The law that created the program in 2017, the Invest in Kids Act, was supposed to sunset after five years, but it's already been extended for an extra year. Voucher supporters want to remove the sunset clause to make the program permanent and also expand it. But we think public funds should only be for public schools, and we're launching a campaign to push for Invest in Kids to sunset for good. We’re happy to report back that, despite massive amounts of lobbying from pro-voucher groups, there wasn’t movement during veto session on any legislation regarding the Invest in Kids Act.

However, legislators will likely be returning in January for a “lame duck” session before the new 103rd General Assembly is inaugurated—and lame duck sessions can be an opportunity to pass controversial measures with the help of votes from legislators who won’t be on the ballot again since they are leaving office.

We are hearing that the removal of the sunset clause from the Invest in Kids Act could be up for a vote in lame duck. So it’s especially important to get informed now about the voucher program in order to step up your advocacy!

This coming Tuesday, Dec 6th at 7pm is a great opportunity to do just that! Join IL-FPS for a virtual public forum hosted by Network 49, where you can learn about: 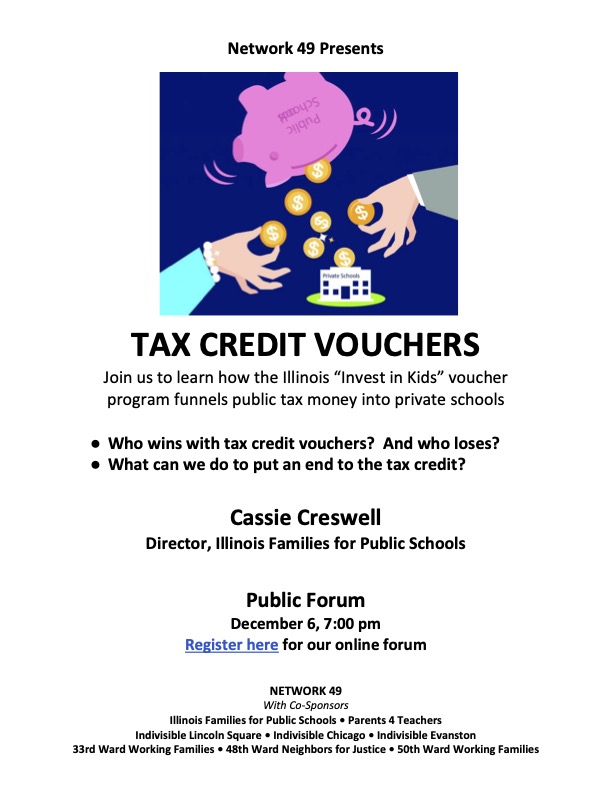 Can’t make this event but want to stay in the loop on action alerts on this issue? Sign up here.

Questions? Email us at [email protected]