We are hearing from some parents who say that their school is not in compliance with the new recess law and that they have until next fall to adhere to it. This law took effect immediately upon signing, and school districts have known about it since late May when it passed the General Assembly.

Many schools have adjusted their schedules to allow for the 30 minutes of play time, so we know it’s possible. We’re putting together a toolkit for parents on how to bring attention to the new law at the school level so you can advocate to ensure your kids get this much-needed time. In the meantime, our FAQ on the law can be downloaded here, and it has a list of resources you can utilize too.

Here's some other commonly asked questions about the recess bill. (Share these here!) 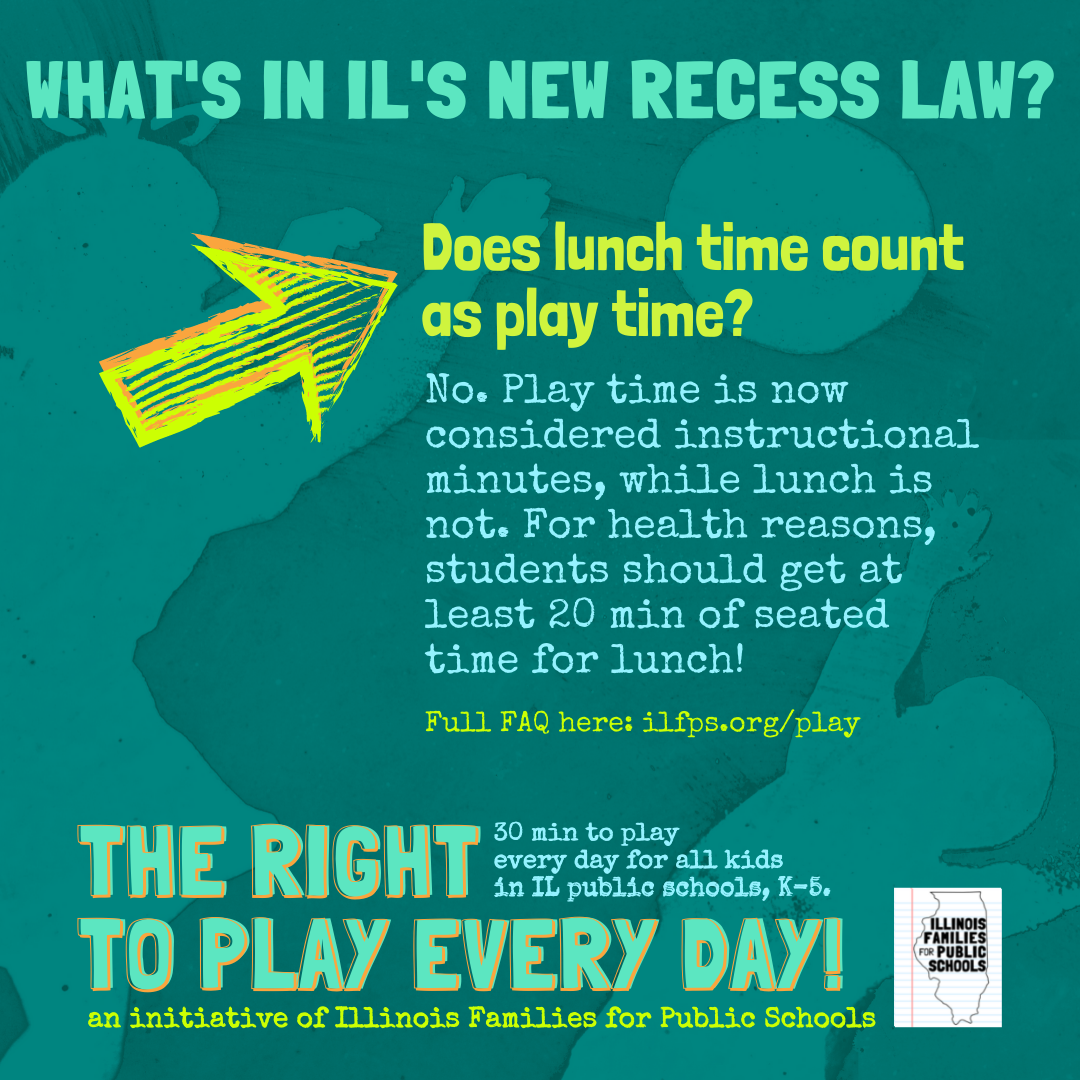 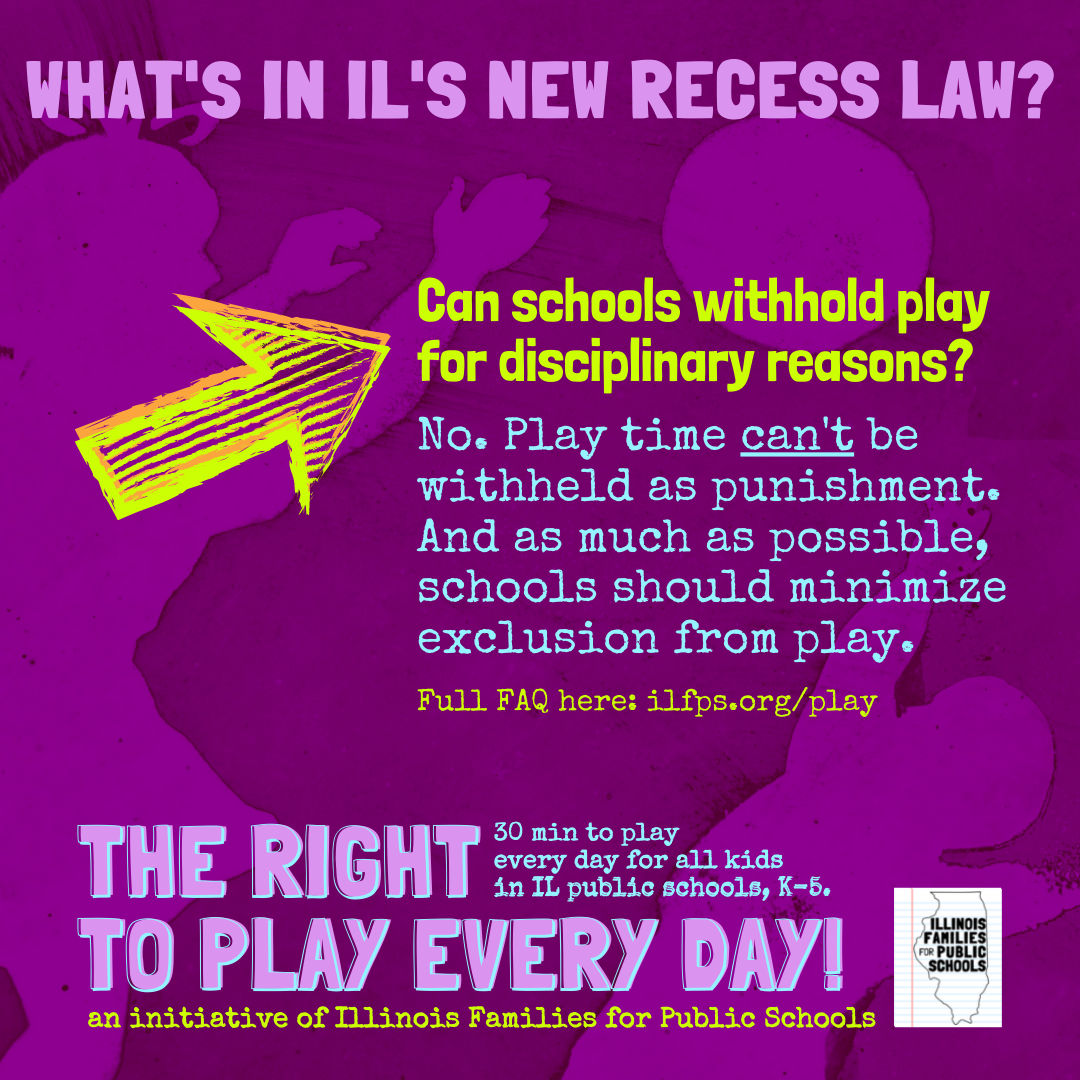 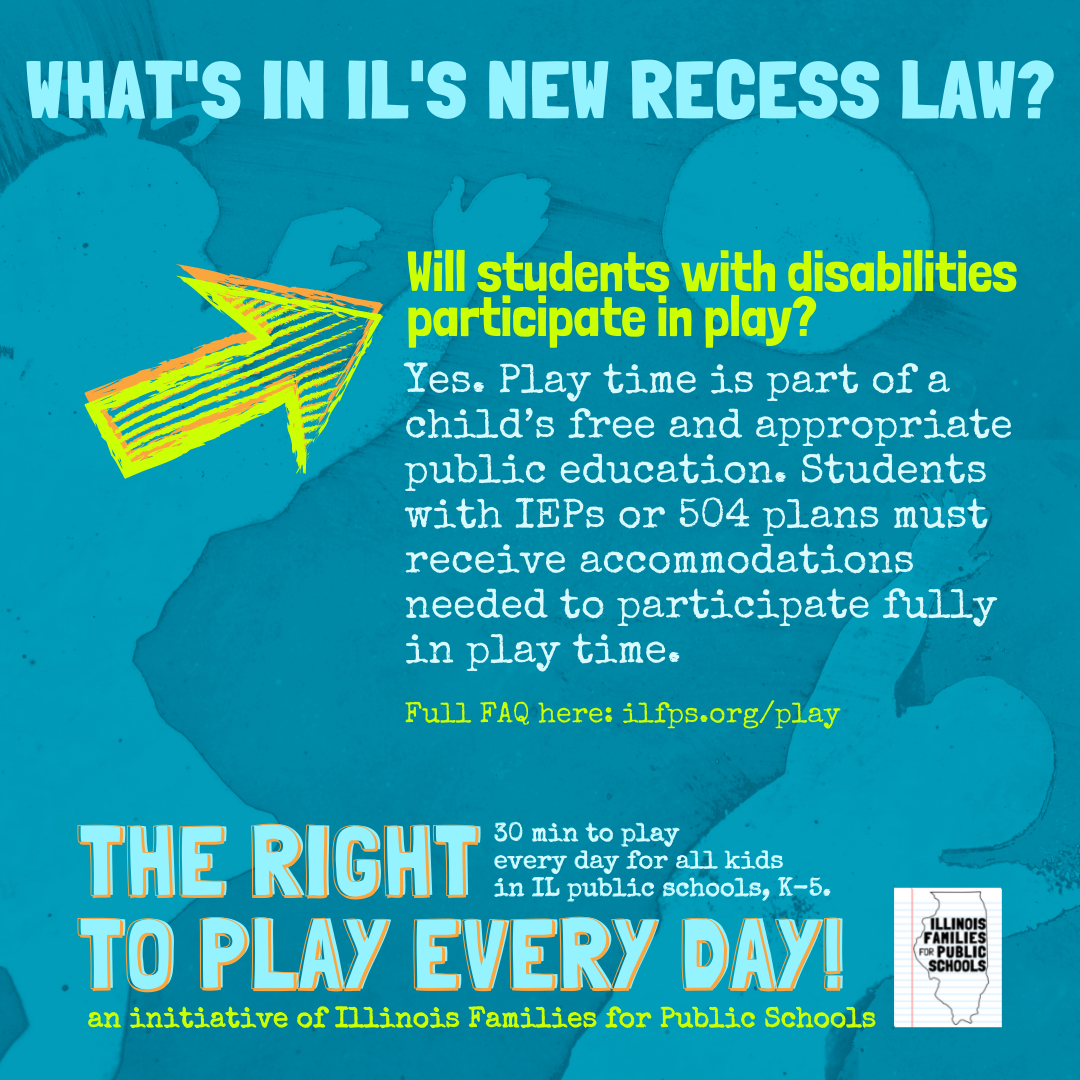 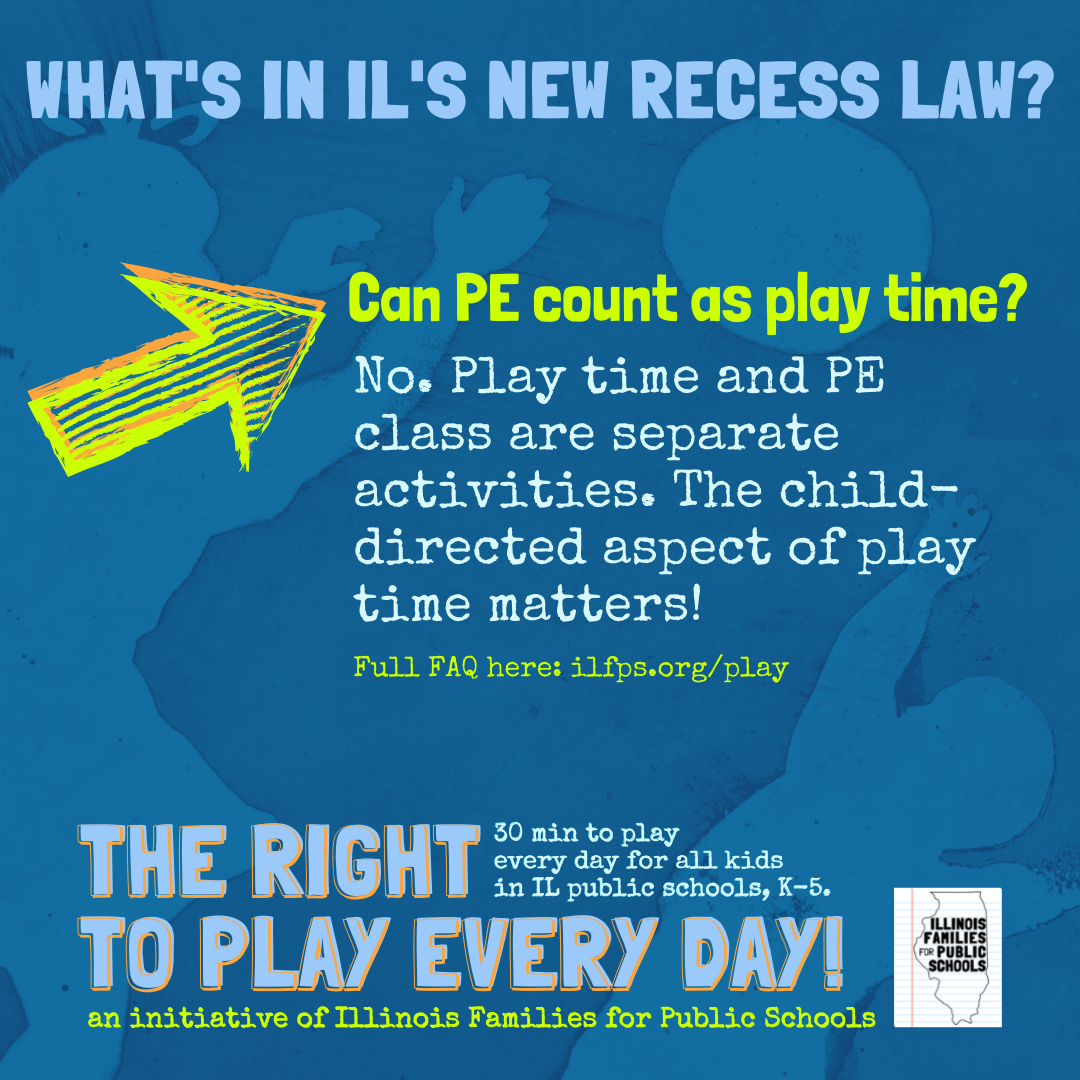 Other important legislation in effect

[Correction! 9.3.2021: This law does not go into effect until January 1, 2022. Schools may implement the language earlier, but are not obligated to until Jan 1.]

Students in Illinois can now take up to five mental health days without a doctor’s note. Thanks to Senator Robert Martwick and Representative Lindsay LaPointe, SB1577 allows this and also encourages schools to connect students with mental health resources.

Congrats to Samay Gheewala, IL-FPS assistant director of organizing and policy, for being appointed to the ISBE Advisory Group for the implementation of the TEAACH Act!  This is the groundbreaking new law that mandates the instruction of Asian American history in IL classrooms, as well as the contributions of Asian Americans toward advancing civil rights from the 19th century onward. The TEACCH Act is to take effect for the 2022-2023 school year. IL is the first state to mandate teaching Asian American history. Thanks to Senator Ram Villivalam and Rep Jennifer Gong-Gershowitz for being the chief sponsors of this bill.

The IL State Board of Ed (ISBE) has now put 60 schools in IL on probation for not adhering to the state mask mandate.  Of these, 24 have changed course and are now in compliance. Schools risk losing the ability to participate in IHSA sports tournaments, funding for the tax credit voucher program if they participate in it as a private school, and recognition of school status by ISBE.

In addition to the new group Awake IL, which has been bombarding school boards with anti-mask, anti-vaccine and anti-"CRT" sentiments, a national group founded by Megyn Kelly (formerly of Fox News), which ironically goes by the name Foundation Against Intolerance and Racism (FAIR), has set up shop in Illinois, attending parent meetings at schools where they don’t even have students enrolled to hand out literature and recruit members. Their main mission is to disrupt schools working to address racial injustice and inequity by claiming that culturally-responsive teaching practices are detrimental to a “common culture” and that affinity groups foster segregation.

For example, at Evanston Township High School this week, members of FAIR with no children at ETHS attended an anti-racism meeting for parents that was part of their Open House to push both of these claims.

And while FAIR’s language might sound innocuous and sensible to some, what exactly does “common culture” mean for students who are looking to build community with their peers because they do not identify with the dominant culture? Affinity spaces can provide support for students whose identities may not be valued, included or recognized, or worse make them the object of bullying. Extensive research on learning shows that teachers and schools must make meaningful connections with students’ lived experience and be rooted in the cultural experience of their communities to succeed. This is both common sense and an evidence-based best practice.

Sadly, these groups are well-funded by wealthy conservative donors with no interest in what public schools actually need to do to ensure all children thrive. According to FAIR’s website, they are hiring organizers at $250/hour to spew a regressive and harmful agenda.

Like our work? Keep us keeping' on with a donation

Speaking of funding, IL-FPS is a tiny org with a $25K annual budget and no full-time paid staff! We are supported by individual (non-billionaire!) donors who like what we do and know how crucial it is to have families with a pro-public ed, pro-public good legislative and policy agenda working at the state level. If you agree, please pitch in with a monthly or one-time donation! 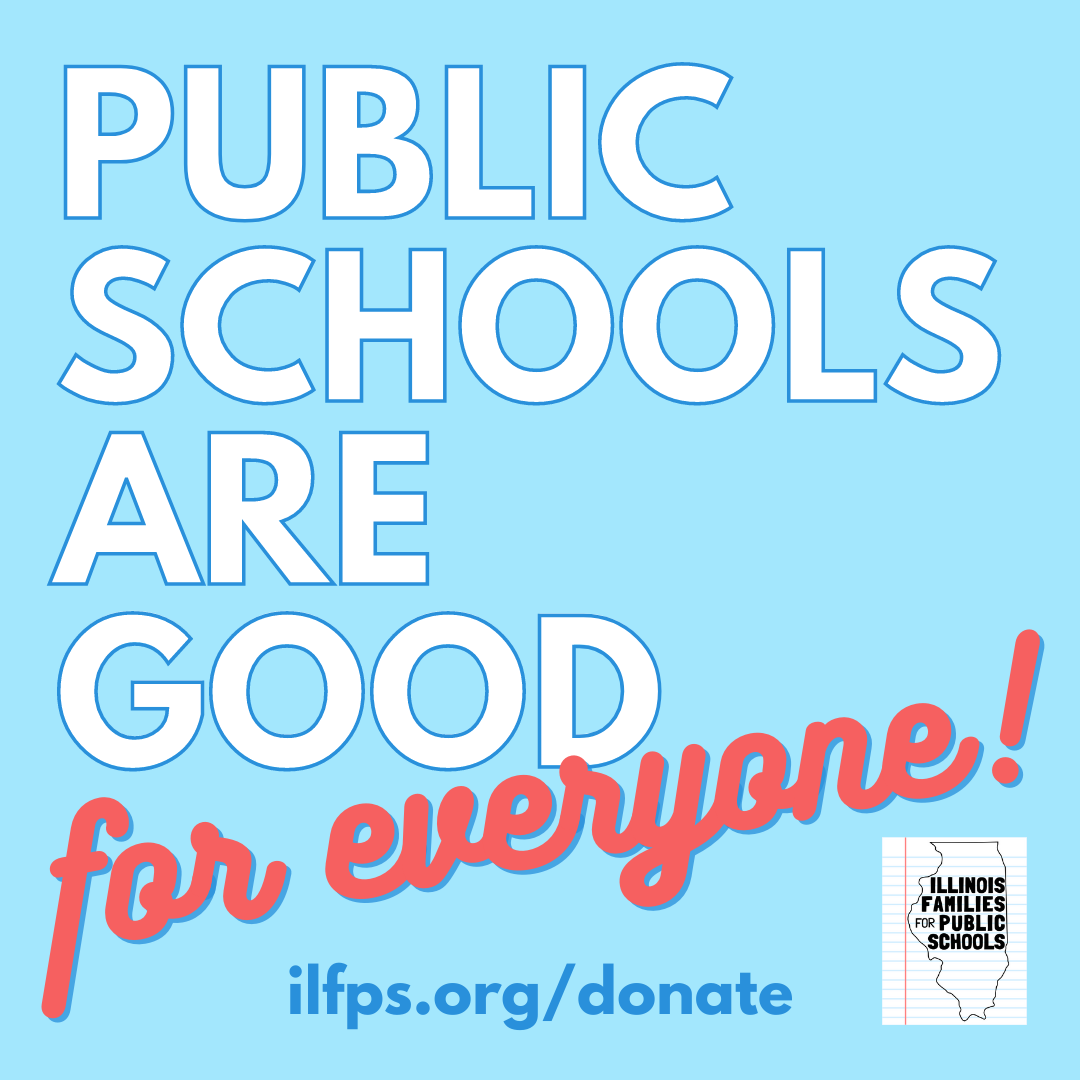